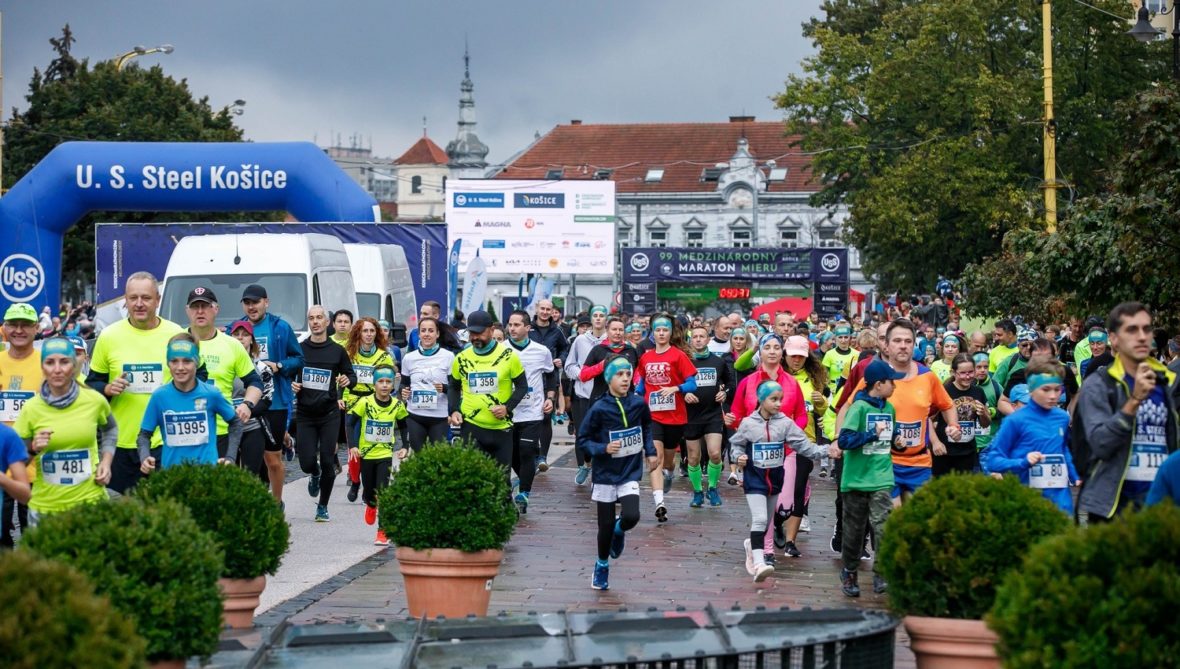 Step by step, day by day… Nothing more than these words is needed for a runner to repeat to themselves, accompanied by the opening melody of a famous American sitcom. But this time, it refers to the footsteps of our colleagues and family members who participated in the world-famous, Europe’s oldest International Peace Marathon in Košice. But why day after day? Because this was the second time in the history of this sport-cultural event that the run took place during both days of the first weekend in October.

Probably all mass sports events are gradually shaking off the restrictions and low attendance caused by the pandemic situation in the world. Therefore, it was highly positive and motivating to see thousands of runners again participating in this year’s International Peace Marathon in Košice. The visitors cheered them on and added their applause to the already unforgettable atmosphere.

And us? We were there. The Telegrafia company takes part in the Košice Marathon every year, and many of its employees represent it directly on the trek. It wasn’t any different this year, and our colleagues, although not all finished the entire 42-kilometre marathon run, left hundreds of kilometres on their feet. The first day of the weekend brought truly commendable performances, especially of the youngest ones. Some on their own and some accompanied by their parents showed their fitness and endurance. Still, their goal was mainly to prove to themselves what they were capable of. The company’s shiny jerseys stood out in the crowd with the cloudy weather. But as if it had been prearranged, the rain held off just as the mini-marathon got underway.

Sunday was in a similar vein to the first day of the marathon. The weather was uncertain and changeable, especially in the afternoon, and the finish was eventually accompanied by rain. However, this did not take away the runners’ enthusiasm. As in the half marathon, several representatives of our departments started in the relay. And the winner? Well, in my opinion, at least, it was everyone who managed to finish the race. Because I wouldn’t have dared myself. Not this year, anyway.

Looking at the results list, I must mention the individual winners. In the men’s category, the winner for the third time was a young, 28-year-old Reuben Kiprop Kerio from Kenya. He didn’t break the trek record but completed the 42-kilometre race with a 15-second deficit in an incredible 2:07:16 time. The women’s category winner was Kenyan Margaret Agai, who broke the record and set a new one of 2:24:04. So all honour and glory to them! Speaking of fame and glory, several Slovak sports personalities came to run the Košice Marathon, whether the sisters Jana and Dana Velďáková, a long jumper and triple jumper, respectively or Matej Tóth, a fast walker and the Olympic champion from Rio 2016 and the world champion from Beijing 2015.

It is great to see that even in these difficult times, the interest in sports hasn’t been fading, and there are still people who can motivate young ones with their achievements. The whole organizational team and those who supported this event played a big part. That is also true for everyone who participated in the marathon, either running on the trek or cheering the runners. Sport is the joy of performance, mental cleansing, and relaxation. It also brings people together regardless of their differences. This is one of the reasons why Telegrafia participates in this event. We want to set an example and are already looking forward to the centenarian marathon edition. Ready – Set on your marks – Go!